In 2004 we started a sole proprietorship. The Vigilia, which was back then still 110 meters by 10.50 meters width and 2508 tons. Soon the challenge became bigger and we bought our first ship (135 meters by 11.45 meters width and 3935 tons). This ship is currently known under the name Vigilia II (2). Our current ship (Vigilia) was build in China (2007) and the final preperations were done by Dolderman Dordrecht (2008). Both ships are equiped with hatches so they can be deployed in every situation.

I navigate together with my wife and kids onboard the Vigilia. The rest of our onboard crew consists out Dutch personel; captains, mates and apprentice sailors. 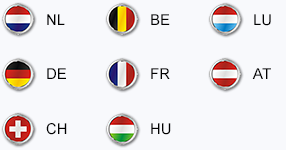 Our coverage runs through all major waterways in Europe ranging from the North Sea to the Black Sea and the Wadden Sea almost to the Lake Constance.

So we are emplyable in a very large area. On the left you can see some examples of countries which belong to our coverage.

Below you will find an extensive map of almost all waterways within Europe. You can click on the image below for a large magnifcation. Our thanks go out to Bureau Voorlichting Binnenvaart for providing this image.

The European waterway network has about 51,700 km of canals, rivers and lakes. Of which approximately 20,000 km mainly concentrated in the Netherlands, France, Germany, Belgium and Austria.

The dense, extensive waterway network, permits you to reach many inland destinations within Europe. From Rotterdam to the Black Sea, from Amsterdam to Basel, from Delfzijl to Antwerp.

Almost from any inland location, goods can be transported deep into the hinterland of Europe by using these waterways.

Almost all big, important industrial regions in Western Europe are accessable by inland navigation. But also many smaller waterways are easily accessible with smaller cargo ships.

In total the Netherlands has 5046 km of waterways, of which 4800 km are suitable for cargo ships. The main transport axes and main waterways are together approximately 1400 km long. The other waterways have a total length of about 3400 km.

Waterways have long been present and are not only used as waterways, but also for water drainage. They form a complete water system.

Because of its location at the mouth of several major European rivers such as the Rhine, Meuse and Scheldt, the Netherlands is the gateway to the hinterland of Europe. Besides these rivers Netherlands has numerous canals and lakes that connect to the major cities. Because of this the Netherlands has a good and extensive network for the transport of goods by water.

Netherlands and water are inextricably linked. On the one hand the water hazard, allowing - forced - us ti be experts ​​in water. This helps us keep our feet dry. On the other hand; the water transport brings us also great opportunities.

In early Dutch history water was already being used for transporting products and cargo over long distances and still plays a major role in inland transport nowadays.